The former Bank of Commerce was originally constructed between 1910 to 1912 as the Western Canada head office of the Canadian Bank of Commerce. Located at 389 Main Street, close to the iconic corner of Portage and Main, the building is part of what was once known as Winnipeg’s Banker’s Row, as well as the Exchange District, a national historic site. 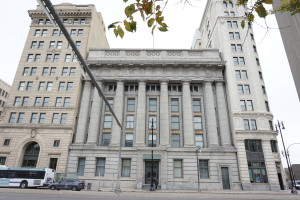 The former Bank of Commerce, now known as the Millennium Centre, is an excellent example of the grand architecture that defined Winnipeg’s commercial core and its importance as a financial centre in the early 20th century.  Designed by Darling and Pearson of Toronto, Canada’s leading architects, as a fine example of a neo-classical design, and for an expenditure of roughly $750,000.   With its monumental edifice, The Bank of Commerce obtained the best Canadian-manufactured building materials available.  The building’s structural design exhibited all the achievements of early 20th-century technology.  A steel frame constituted the structure’s skeleton, and architects specified a concrete foundation extending to a maximum thickness of 4 feet, 9 inches. 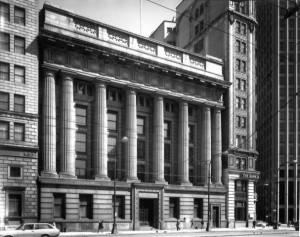 Entering through the huge bronze doors, the foyer has a fourteen-foot high barrel-vaulted ceiling, green marble Doric columns, and marble walls.  In addition, an important wall commemorating those employees who lost their lives in World War 1.

The majestic quality of the banking hall, now known as Celebration Hall, is 100 feet long, 72 feet wide, and 50 feet high.  Comprised of coloured glass, a massive circular dome 52 feet in diameter illuminates the banking hall with the shields of the Canadian Bank of Commerce, Great Britain, and Manitoba graces the ceilings four corners. 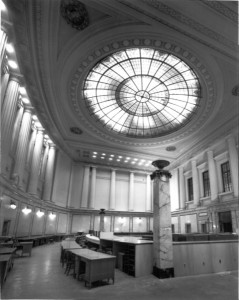 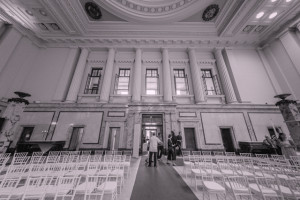 The Bank Manager’s office, now known as the Tapestry Room, is equally magnificent! It has original tapestry covering all four walls, walnut paneling, ornate, fluted pilasters, modelled plaster panel ceiling, and a fireplace enclosed in a walnut mantelpiece highlighting the room. Before departing, visitors can admire the quarter-cut oak floor and a doorway frame with pilasters topped by a pediment.  It makes an excellent spot for a bridal party, or for holding meetings and conferences. 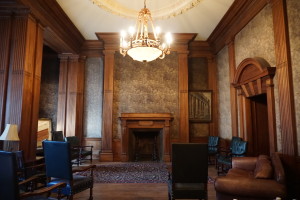 Behind the banking counter on the east wall is the original Treasury Room with a vault made of steel, concrete, and brick construction in the accepted fashion for monumental banking halls.

Sadly, the building was closed after the bank relocated to the Richardson building.  Due to public pressure to protect it, the bank was unsuccessful in demolishing the former Bank of Commerce building for a parking lot and was municipally designated by the city in 1979 to protect it from future demolition.  Since 2000, it has been owned and operated by the non-profit organization, 389 Main Street Heritage Corporation, and managed by Heritage Winnipeg as part of our mandate to protect our built heritage.